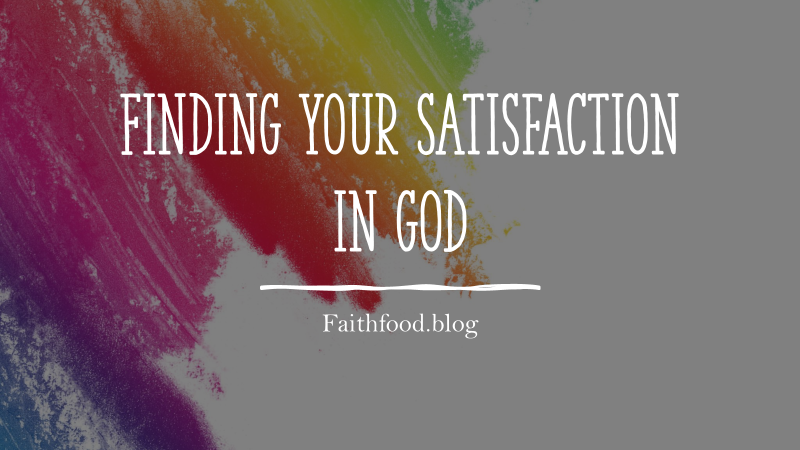 In the first ten chapters of Numbers, we repeatedly read of the obedience of the people to the Lord’s commands. But three days into their march towards the promised land, they begin to complain. Numbers 11 is a turning point in the narrative of their journey through the wilderness.

What did they first complain about?

Numbers 11:1-2 “Now the people complained about their hardships in the hearing of the Lord, and when he heard them, his anger was aroused. Then fire from the Lord burned among them and consumed some of the outskirts of the camp. When the people cried out to Moses, he prayed to the Lord and the fire died down.”(emphasis mine)

Their extended time in the desert (remember that this was the start of their second year out of Egypt), would not have been easy. But it looks like they did not take their complaint to the Lord but rather God heard their constant grumbling.

For us: When we do not take what lies in our heart to God, it leads to discontentment, and a skewed perception of where our gratitude and desires should rest.

How did God respond?

The Lord’s anger was aroused and there was a purging fire in the outskirts of the camp that was quelled when Moses prayed for them when they cried out to him.

We would think that this response from God would have given pause and caused the people to reflect on their behaviour. But what do we see happen again?

Numbers 11:4-6 “The rabble with them began to crave other food, and again the Israelites started wailing and said, “If only we had meat to eat! We remember the fish we ate in Egypt at no cost—also the cucumbers, melons, leeks, onions and garlic. But now we have lost our appetite; we never see anything but this manna!”

Who were the Rabble?

The rabble was a term for the non-Israelite mixed group of people who joined the Israelites when they left Egypt (NIV Study Bible pg. 206).

The rabble began to crave other food and the Israelites began to complain too.

For us: How often we as Christians can forget the perspective we should have and give into what the world around us is fearful about or find their security in, and we begin to join in and grumble about it all too. A familiar analogy comes to mind, to not be thermometers, getting influenced by the ups and downs of what happens around us but be a thermostat, where our setting is Christ set and knowing who our rock and refuge is, should allow us to have a steadiness that affects those around.

The people complained about not having meat, fish, other variety of foods that they had in Egypt. Notice what they say, they remember what they ate ‘at no cost’.

We look back at Exodus 3:7-9 when God appeared to Moses in the burning bush.

“The Lord said, “I have indeed seen the misery of my people in Egypt. I have heard them crying out because of their slave drivers, and I am concerned about their suffering. So, I have come down to rescue them from the hand of the Egyptians and to bring them up out of that land into a good and spacious land, a land flowing with milk and honey—the home of the Canaanites, Hittites, Amorites, Perizzites, Hivites and Jebusites. And now the cry of the Israelites has reached me, and I have seen the way the Egyptians are oppressing them.”

When the Israelites complained, reminiscing about their food in Egypt, they say that they got to eat all those foods at no cost but when we read Exodus, we are reminded that the cost they paid was a loss of their freedom, enduring suffering and oppression at the hands of the Egyptians.

For us: When I look back on challenging times in my life, I often realise that God was right there caring for me in various ways. Sometimes we realise it when we are in the midst of it all and some things we realise later. For the Israelites, with the food that they got to enjoy in Egypt, they connected this good thing to Egypt and not the hand of God over them while they were there.

Is Our ‘Good’ in alignment with God’s ‘Good’ for us?

God had provided Manna for them miraculously in the desert. In Exodus 16:4 God says “I will rain down bread from heaven for you. The people are to go out each day and gather enough for that day. In this way I will test them and see whether they will follow my instruction.”

The reception of the manna by the people was to be a significant test of their obedience. The people literally got to witness a miracle six days of the week when manna would rain down. The people also had a constant reminder of the presence of God with them through the cloud by day and fire by night. And yet, they say “we have lost our appetite, we never get to see anything but this manna”

In view of the good things God was to give them, they were expected to receive each day’s provision of manna as a gracious gift of a merciful God, and as a promise of the abundance to come. In spurning the manna, they had spurned the Lord (verse 20 ‘because you have rejected the Lord who is among you’)

For us: As we see the Israelites begin to define their ‘good’ to when they were in Egypt, it cautions us to question ‘What defines our ‘good’? Do we have the right perception of what is ‘good’? Like the Israelites who were allowing their fleshly desires to dictate their lives and therefore were blind to the blessing and presence of God with them as the best place they could be in, where is our ‘good’ rooted? Is it to be under the shelter of his wings no matter if it is the wilderness or the by the streams of abundance or do we crave the temporal things that our flesh desires over submission and intimacy with our Lord?

The desires of a grumbling heart can only be satisfied through intimacy with God. Drawing near to God, satisfies our hearts, quenches our soul and rights our perspective. May we never lose our appetite for the things of God and begin to crave a ‘false good’ that is far removed from Him.

30 thoughts on “The Book of Numbers – What Defines your ‘Good’?”