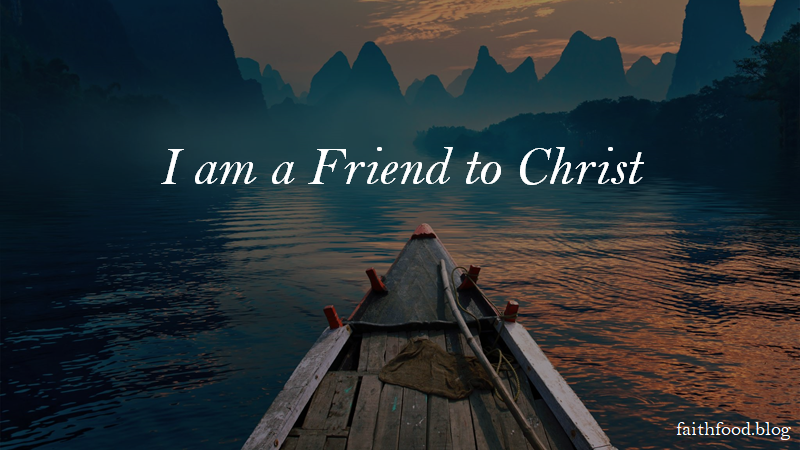 Jesus is our king, our Lord and Saviour and also our friend. We don’t have to choose between Him being our Lord or our friend. He is both to us. We worship Him, revere Him and at the same time we confide in Him like we would a friend.

I was reading the parable of the wedding banquet in Mathew 22.

Jesus speaks this parable in response to a remark made by one of the guests at a banquet about ‘the feast of the kingdom of God’. Briefly, Jesus points out that many are invited to be part of His kingdom, but not all accept the invitation, and not all follow that invitation with a behaviour evidenced of being chosen.

In verse 12 of the wedding banquet parable, we read the King who is hosting the banquet say “Friend, he asked, how did you get in here without wedding clothes? The man was speechless. Then the king told his attendants, ‘Tie him hand and foot, and throw him outside, into the darkness where there will be weeping and gnashing of teeth’.”

I was intrigued by why the man who could not be there and was thrown into the darkness, called ‘Friend’ by the king.

In Mathew 26: 50 Jesus calls Judas, friend. This was when Judas was in the process of betraying Jesus. We read, “While he was still speaking, Judas, one of the Twelve, arrived. With him was a large crowd armed with swords and clubs, sent from the chief priests and the elders of the people. Now the betrayer had arranged a signal with them: “The one I kiss is the man; arrest him.” Going at once to Jesus, Judas said, “Greetings, Rabbi!” and kissed him. Jesus replied, Friend, do what you came for.”

The term friend in both of the above instances, do not necessarily seem to be used in a manner that would indicate addressing someone as we would think the term to be generally used for.

In John 15: 14-15 Jesus says “You are my friends if you do what I command.  I no longer call you servants, because a servant does not know his master’s business. Instead, I have called you friends, for everything that I learned from my Father I have made known to you.”

In light of this verse neither the man in the banquet or Judas seem to following Jesus’s ways or His word and hence called friend.

We know what kind of a friend we have in Him, the one who lay down His life for us so that we can be redeemed. His love is unconditional, sacrificial and forever. A greater love we will not find.

In John 15, when Jesus calls us friends, he says it is when our conduct is reflective of the transformation within us because of Christ and it is because we know the Father.

So, what kind of a friend will He find in us?

God loves each and every one of us and He did love Judas too even in that moment but reading and reflecting on the term ‘Friend’ that was used differently in those couple of verses, made me reflect on what kind of friend Jesus would find in me?

Let’s reflect on some questions.

Are we spending time with Jesus? – what kind of friend can we be if we do not take the time out to talk with Him. Prayer is a powerful means of connecting to God. We are given the privilege to able to pray anywhere and everywhere and yet we struggle to be consistent in our commitment to spend time with Him. The enemy knows what a powerful tool it is and tries His hardest to keep us from communing with God.

1 Thessalonians 5:17 says “Pray without ceasing.” Continuous communication and fellowship with God leads us to deeper communion with Him.

Are we getting to know Him? – are we dwelling richly in the word to get to know our Heavenly Father better and are we with intent choosing to walk in the spirit and submitting to His will.

Mathew 7: 21 says, “Not everyone who says to me Lord, Lord will enter the kingdom of heaven, but only who does the will of my Father in heaven.”

The measure and extent of Jesus’s love for us leads Him to extend that hand of friendship to us who are not worthy of it, but friendship with Jesus cannot be disassociated with obedience to His word.

So, may we take the time today and reflect on what kind of friend Jesus would find in us. When Jesus calls us friend, may it not be how he referred to Judas or the man in the parable but a friend in a true sense that He meant, who loves Him and one another as He loves us, who listens, trusts, delights in His truths, honours Him, walks in His ways and bears fruit.

31 thoughts on “I Have Called You Friends”