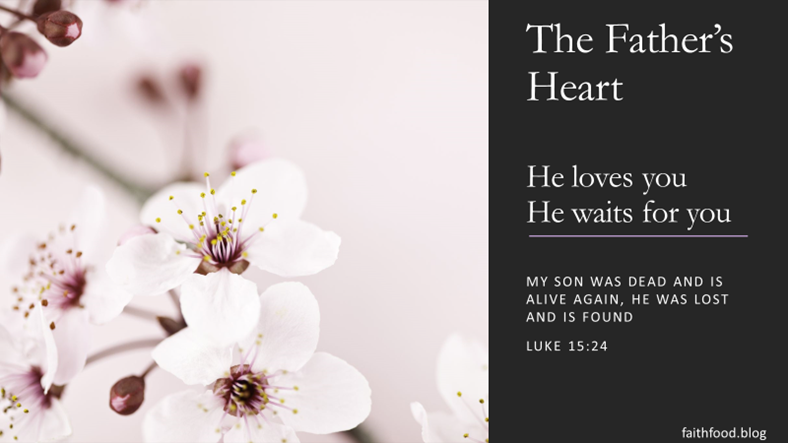 Today we will dig deeper into the father’s and brother’s response to the return of the prodigal son.

Verse 20 says “while the son was a long way off, his father saw him and was filled with compassion for him, ran to his son, threw his arms around him and kissed him.”

1. The father sees him from a distance – indicating that he watched and waited for his return and never lost hope.

2. The intensity of the father’s reaction is seen with the fact that he ran to the son. He did not stand aloof waiting for the son to beg for forgiveness but the father loved him so much and was eager to show him that love and acceptance and restore the relationship.

3. He does not chide him but throws his arms around him and kisses him. Unconditional love and forgiveness are what we see here. Neither did he minimise his son’s mistakes but just forgave and embraced him.

God, our heavenly father bestows on us HIS love the same way. He patiently waits for us, readily forgives us and eagerly embraces us.He is a God of Compassion, love, mercy and forgiveness.

And HE is a God of second chances.

The father’s reaction was not based on the son’s past mistakes.
There was repentance and a choice to be with the father from the son’s side and only love and acceptance from the Father.

The father did more than what the son expected, he restores the son to the full privilege of being his son, “puts the best robe, a ring, sandals and they celebrate with a fattened calf.” That is the heart of God. The father’s acceptance of the repentant son is total. That is God’s grace – complete restoration.

But His love for us is so much that HE does not want us to stay where we are at, HE wants us to move closer to HIM.

Are you moving closer to Jesus?

The story goes on and we get a glimpse into the reaction of the older brother.

The Brother Grumbles (Luke 15:25-32).
The brother stayed, brought no disgrace, worked hard for the father and kept all the rules. He was not too pleased when he saw the celebration underway for his younger brother, he was angry and jealous.
He thought all what he did makes him a better or favoured son, he thought he deserved the celebration instead of his brother.

Here is where we can read ourselves into the story, as believers in Jesus, we live in our father’s house but we cannot forget what it is all about – a heart for the lost. The house of God is for everyone, all are welcome. God longs for everyone to turn to HIM. Just because we believe, it no way makes us better than anyone else, because we are all sinners and all of us need Jesus.

If you have walked with the Lord for a while, take time to reflect on whether you have become stagnant and are not moving any closer to Jesus. And are you still in tune with the father’s heart?

In verse 29, the Older son says to the father, “all these years I have been slaving for you and never disobeyed your orders.” It is sad to hear him saying that all the time he worked for the father felt like slaving. May we remember to check our hearts and our reasons for what we do for the Lord because it should bring us Joy; it may not be easy but neither should it feel like a burden.

We see in verse 31, the father saying to the older son; “My son, you are always with me and everything I have is yours.”
We see the Father’s heart again and the love he has for both his sons. He goes out to plead with the son. That is how our heavenly Father loves us.

The picture of the way the father forgives and responds to the prodigal son’s return is the way we should react and rejoice over someone choosing Jesus. Our biggest role as a church is to remove any barrier and not create them, make each and every kind of person feel welcome. They should not have to fit a certain look or certain type of dressing or behaviour to feel welcome.

As I dug into this parable, I felt compelled to question myself on certain things:
1. Do I make it easier or harder for others to connect to God?
2. What do I add to the church experience?
3. If I come across a prodigal son, how will I respond?
4. I have been walking with the Lord for quite a while now, have I become stagnant or am I moving closer to Jesus?
5. And is my heart truly close to God, does it ache for things that matter to God?

I hope not to reflect the behaviour of the pharisees and think I am on higher ground than anyone else. I strive to have a heart after my heavenly father, continue to grow closer to Him and respond like Him.

I hope you take the time to ponder on these questions.

25 thoughts on “A Father Celebrates and a Brother Grumbles”